Tom Cruise promises autographs to everyone 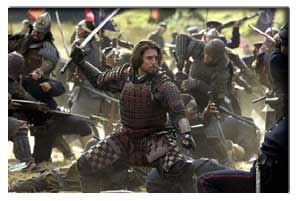 Tom Cruise has promised to sign autographs for every fan who turns up in London's Leicester Square for the premiere of his latest film Last Samurai, The (2003).

The actor, who has said he came within inches of death when a stunt went wrong during the filming of the martial arts movie, is famed for his lengthy walkabouts.

The last time Cruise was in Leicester Square was for the premiere of Minority Report (2002), when he spent 90 minutes signing autographs and chatting on fans' mobile phones. The year before that he went on an hour long walkabout for the premiere of Vanilla Sky.

Speaking ahead of tonight's premiere, Cruise said: "Hey, if anyone shows up and wants my autograph, they can have it. I love coming to London and meeting the fans."

The actor, who insisted on doing many of his own stunts for the The Last Samurai's fight scenes, said he was acting out one scene with Hiroyuki Sanada when a technical fault nearly led to tragedy.

The two men were approaching one another on mechanical horses and Sanada's horse was meant to stop a split second before he swung his sword at Cruise's head. But the mechanism failed and the horse carried on towards Cruise - whose life was saved by Sanada's expert martial arts skills.

"One day we were shooting, I was on a mechanical horse and Hero was on one too," Cruise said. "He was approaching me and then suddenly his horse hit me and his sword was right here (points an inch from his neck). Luckily Hero is trained in martial arts. I trust him."

Cruise, 41, trained for eight months for the role. He said: "I learned Kendo, swordsmanship, Japanese martial arts, and all manner of weapons handling. I not only had to ride a horse, but I had to effectively fight while riding. I studied Japanese. As far as training goes, you name it, I've done it."

He has been nominated for a Golden Globe for his role and is strongly tipped to earn an Oscar nomination. In the film he plays Captain Nathan Algren, a disillusioned American Civil War veteran hired to train Japan's first modern conscript army in the late 19th century.