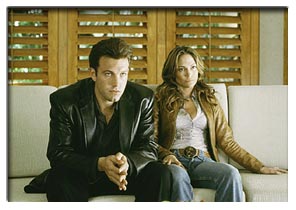 Ben Affleck has insisted that there is still no date set for his wedding to Jennifer Lopez.

He said the interest of the world's press in his personal life could be "distressing" and the "frenzy" had led the couple to postpone their wedding last year.

Sporting a goatee beard - "for excitement" rather than an up-coming role - he told Channel 4's Richard & Judy show: "There actually is no date and if there were one I would probably not be very wise to share it."

Asked why the wedding had been cancelled Affleck said: "It was cancelled for a variety of reasons, most of them have to do with the fact that it seemed it was a period of time that was just too frantic.

"It just seemed like, here we are, we're two people, we can do this whenever we want.

"We certainly don't need to feed into what had become an escalating frenzy beyond our control and that was clearly going to turn into something unpleasant.

"So why not take our time with it?"

The star added: "Neither one of us was in any great hurry to do the thing.

"It's not as if we were waiting to sleep together, for example, which would probably put a certain kind of urgency to the matter."

The couple postponed their wedding last September. He was asked if the publicity had been distressing.

"It's distressing, certainly, if you allow it to be. I think you can control to what degree you let it make you crazy. I try not to pay too much attention to it.

"At the end of the day, this stuff is pretty silly."