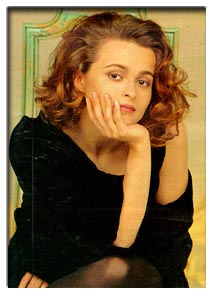 Helena Bonham Carter put on a brave face when she attended the premiere of her new film Big Fish, a day after the death of her father.

She arrived at the event in London's Leicester Square in a black dress, with her partner Tim Burton - who directed the film. But the star, who plays a witch in the movie, was too upset to talk to the press.

Fellow Big Fish star Ewan McGregor, dressed in a dark suit, arrived with his wife Eve Mavrakis. The stars walked up specially laid grass instead of the traditional red carpet.

The film is heart-warming story about the relationship between a father and son. Storyteller Edward Bloom (Albert Finney) is an old man whose tall tales about his younger years fail to impress his son.

McGregor plays Edward as a young man, travelling the world on a series of fantastical adventures. Big Fish has been nominated for seven Baftas. Burton said: "It was a very nice surprise, it's wonderful to be surprised."

McGregor said: "I'm very happy to be part of such a successful team. This was a real team film with an amazing cast list. Tim Burton is a beautiful film-maker and I'll be happy to work on all his movies. I was very moved by this script."

The actor said he learned to fish in Alabama where part of the film was set. He added that he was taking a short holiday before working on another movie.