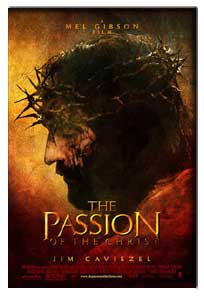 Inscribed crucifixion nail pendants, coffee mugs with Aramaic characters, framed art, witness card packs and lapel pins.
Not only has Mel Gibson's The Passion Of the Christ (2004) caused a furore of religious proportions, it is also taking movie merchandise to new extremes.

According to the official website, the range of products are a "great way to share the gospel".

They are part of the massive marketing campaign to promote the film, which has been led by religious groups around the world who have booked out cinemas ahead of the film's release in Australia tomorrow.

Prices include $US2.99 ($3.89) for an Aramaic pocket reminder with witness card to $US16.99 for a 24-inch pewter nail pendant on a leather necklace which features Isaiah 53:5 inscribed on the side.

For $US6.99 you can order a cross keyring, or spend another $US3 and you'll get a bracelet with a replica of the cross featured in The Passion.

The film's distribution company, Icon, owned by Gibson, said it was not involved in distributing the merchandise in Australia, but two religious retailers in Melbourne and Sydney would stock them.

The Koorong Christian retailer in Sydney's northwest said it was expecting to receive some of the products by mid-March.

"We hope they all sell but I think it's really the books that will be most popular," Koorong store manager Rob Morris said, referring to the coffee-table book of behind-the-scenes interviews and pictures by Australian photographer Ken Duncan which will be launched in Sydney tomorrow night at a charity premiere screening.