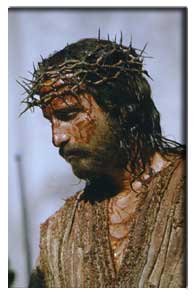 Some British Jews have criticised Mel Gibson's new film about the death of Jesus after attending the first UK screening.

The Jewish Board of Deputies said The Passion Of Christ (2004) was "disgusting" and want it banned. They

claim the film's sickening scenes of cruelty were anti-Semitic and likely to incite racial hatred against them.

The controversial two-hour movie is directed, produced and co-written by Gibson and gruesomely portrays the last 12 hours of Christ's life.

It shows the Jewish high priests demanding his crucifixion before looking on as he is tortured and put to an agonising death. In the most graphic scene, Jesus is flayed by a group of Roman centurions.

Neville Nagler, director general of the Jewish Board of Deputies, said: "The glorification of violence and bloodshed and reinforcement of medieval stereotyping of the Jewish people are extremely dangerous. It would have been better if this film had never been made."

The film made £12m plus £1m for the private showings on its opening day in the US, says The Sun.

Lord Janner, former president of the Board of Deputies and vice-president of the World Jewish Congress, said after the screening: "I hated it. I think it extraordinary that anyone would voluntarily go to see this film. The Jews come out of it as a pretty nasty lot and I believe it could cause great harm in relations with the Jewish community."

The film's official release in Britain is March 26.