Wesley refuses to talk about Blade 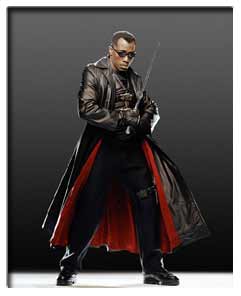 Wesley Snipes has pulled out of all press duties for his third Blade movie Blade: Trinity.

The actor was so insistent on not talking to the media about the movie, he signed up for another film in Bulgaria as soon as shooting finished reports IMDb.com.

"He hasn't called me to talk about it. If he was genuinely unhappy with the film we would have heard something. There's a lot going on in his life and he's got a lot of issues at hand so who knows. The guy is an awesome Blade.

"Sometimes the paths of communication between us are fantastic and sometimes they're non-existent. If Wes doesn't want to do press that's a career choice he's made."

Snipes also insisted on having total control on the set of Trinity, green-lighting all scenes in which he appeared, and he stayed in character as the brooding vampire anti-hero throughout the movie.

Frankfurt adds: "Wesley has script and director approval of all the Blade movies. He had to sign off on absolutely everything we were doing."

Blade: Trinity will be released in the UK on December 8.