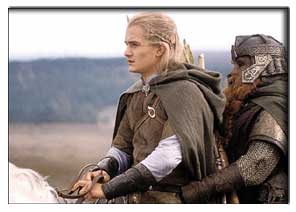 Orlando Bloom has taken his first steps towards becoming a Buddhist.

The Lord of the Rings star, 27, took part in an hour long ceremony at a centre to commit himself to the faith.

A visitor said: "He looked really happy. He looked comfortable and quite excited."

He was presented with his Gohonzon, a scroll with Chinese and Sanskrit characters on it.

He had earlier arrived at the retreat with two guests reports the Mirror.

Orlando accepted his scroll from centre director Ricky Baynes. An onlooker said: "He shook Ricky's hand like the other people getting their Gohonzons and looked calm.

"When everyone had theirs we all clapped and cheered. Afterwards we all had a cup of tea together and Orlando went to the gift shop. People were queuing up to get his autograph and have their picture take with him.

"He was very friendly and didn't seem to mind."

Orlando, who played elf Legolas in the Lord of the Rings trilogy, has never publicly spoken about his religious faith but has often been seen clutching Buddhist prayer beads.

Orlando, who also starred alongside Keira Knightley in Pirates of the Caribbean, has been dating actress Kate Bosworth, 21, for the past 18 months. They met on the set of a Gap advert last year.