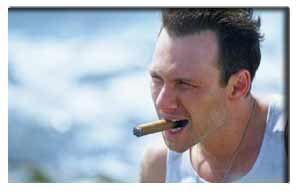 The star, 35, who has been appearing on the West End production of One Flew Over The Cuckoo's Nest, has decided to quit LA to reside in London with his wife Ryan Haddon and their two children reports Femalefirst.co.uk.

Slater's mother and Los Angeles casting agent Mary Jo Slater said: "I don't think he would ever go back if he could help it.

"Life in Los Angeles is no fun. He was raised in New York and he finds London is more like that, only with more to do."