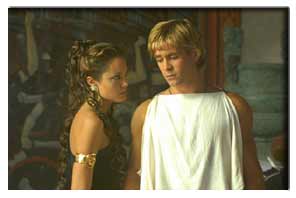 Colin Farrell says that Angelina Jolie is his perfect woman.

Farrell arrived at the London premiere of Alexander last night with Jolie to promote the blockbuster, and admitted she was his ideal woman.

He said: "I haven't had a girlfriend in a long time but Angie's pretty close to my perfect woman. At the moment I am single but Angelina could well and truly be the right woman. She certainly comes close."

The two stars wowed thousands of fans who had waited hours to catch a glimpse of them both, stopping briefly to sign autographs before Farrell - who plays legendary general Alexander the Great in the movie - planted a kiss on his co-star.

Angelina also admitted she has a soft-spot the actor, before entering the cinema to watch the £80million movie directed by Oliver Stone - who she is also rumoured to have dated reports Femalefirst.co.uk.

She said: "It has been mind-blowing working with him. He's really, really fun to be around. He's full of surprises."