Anne Hathaway has defended the image of her in the Catwoman catsuit, saying there is more to come.

The first photo of the actress in costume as Selina Kyle in Dark Knight Rises, The (2012), riding a motorcycle, launched numerous blog posts, tweets and web debates about her transformation as the iconic character, but Anne says first impressions can be deceiving. 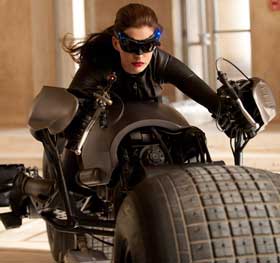 Anne - who next stars opposite Jim Sturgess in One Day - was so concerned about the photo that she even asked around for feedback.

"I was not going to admit it - I asked someone to send me a few reactions," she added.

Snaps of Tom Hardy as villain Bane jostling with Christian Bale, reprising his iconic role as Batman in Christopher Nolan's third and final instalment of the superhero franchise, have also been seen.