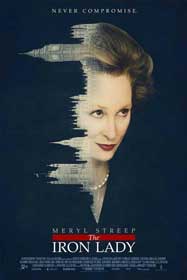 When details of the screenplay became public over a year ago, Thatcher's children were quoted in the press as being "appalled" at the concept.

Questions were also raised as to whether an American actress should play one of the towering figures of British politics.

Iron Lady, The (2011), which hits cinemas on January 6, depicts an ageing Thatcher looking back on the highs and lows of her career and the personal price she paid for power.

Streep attended the photocall against the backdrop of the Houses of Parliament, and was joined by the movie's director Phyllida Lloyd, who also worked with Streep on the hit musical "Mamma Mia!"

The Iron Lady is likely to be a major media talking point over the coming weeks in Britain, where former conservative leader Thatcher is still a divisive figure both revered and reviled by the public.

Streep, a two-time Oscar winner and one of Hollywood's most respected actresses, told the Daily Mail newspaper that playing Thatcher was the biggest role of her career.

"It took a lot out of me, but it was a privilege to play her, it really was," the 62-year-old was quoted as saying.