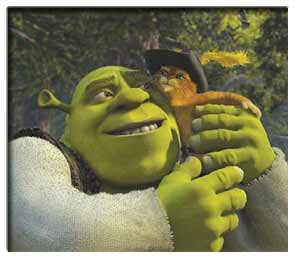 Jeffrey Katzenberg has disclosed that work on Shrek 3 began nine months ago and that work on Shrek 4 began three months ago. Katzenberg made the disclosure during an interview with the Sydney Morning Herald as he arrived in the Australian city for the local premiere of Shrek 2. "We have two more chapters to tell. Not unlike Peter Jackson did with The Lord of the Rings. The difference is they did have the guts to make all three of them back-to-back-to-back," he said, noting that in the case of the Shrek films, 13 years will have passed from the time the original began production until the fourth film is released in 2009. "We do spend three or four years making them," he said. "The nature of the process is that you get to see your work and view it over and over and over again -- and redo it and remake it in a way that live action doesn't have." Katzenberg credited Pixar's John Lasseter with "carrying the Disney flame," explaining that "Lasseter has all of those qualities that Walt Disney had as a storyteller. He has very much a childlike perspective in terms of how he looks at the world and how he sees things."