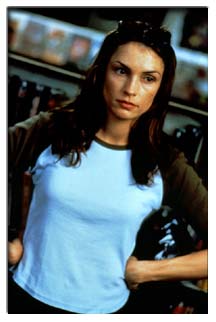 According to Britain's DAILY MIRROR newspaper the DOGMA actor was dropped by the gorgeous actress because he wasn't interesting enough. Affleck was quickly replaced by an unidentified man who joined Janssen in Canada where she's filming the new MICHAEL DOUGLAS film DON'T SAY A WORD. Janssen admits, "I got bored with Ben." (CPT/WNTMI/KW)