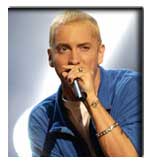 Eminem is expected to attend the premiere of his new film at the Toronto Film Festival.

The film will be shown on Sunday as a "work in progress."
It opens in America on November 8 and in the UK in January.