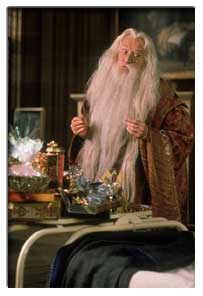 Richard Harris, the actor that plays Professor Dumbledore in the popular Harry Potter films was diagnosed with cancer but is said to be responding well to treatment.

Harris' agent says that he is expected to recover in time to reprise his role as the professor in the third Harry Potter film Harry Potter and the Prisoner of Azkaban (2004).

Richard Harris made his reputation many years ago in films such as This Sporting Life, The Guns of Navarone and Mutiny on the Bounty but has become known to a new generation for his portrayal as Professor Dumbledore - a role which he apparently undertook after his young niece threatened never to speak to him again if he didn't.

Harris was well known for his rebellious party lifestyle and felt that it would be difficult to sign up for the commitment of the Harry Potter series. The cast were required to sign up for a seven film deal, which is the number of books that J.K Rowling is planning on writing.

Film Stories : Harry Potter and the Chamber of Secrets (2002)