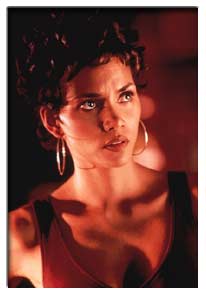 Halle Berry has broken her right arm while filming a scene for the supernatural thriller Gothika in Canada.

Berry, 34, was filming "one of the more physically demanding scenes" when she was hurt on Wednesday, says Joe Everett, a spokesman for the Warner Bros production in Los Angeles.

Everett did not have details of the scene.

Berry broke her ulna, a long bone in the forearm, and was treated at a Montreal hospital and released, Everett says.

The movie was in its fifth week of a nine-week shoot. It is unclear when she might return to the set.

In the film Berry plays a criminal psychologist who wakes up to find she is accused of murdering her husband and is a patient in the asylum where she works.

Gothika is set for release in October.