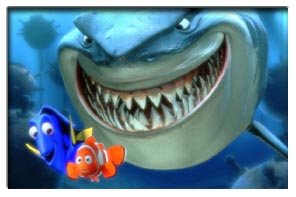 Finding Nemo (2003), a cartoon set on the Great Barrier Reef with Dame Edna Everage as Bruce, the razor-toothed great white shark and Geoffrey Rush as Nigel, a gossipy pelican has smashed animation box office records in the US.
The deep-sea yarn hooked top spot at the movies, taking $70.6 million on its opening weekend.

The Disney-Pixar comedy about a clown fish searching for his son who landed himself in a tank in a Sydney dental surgery beat the Jim Carrey comedy Bruce Almighty (2003) into second.

It was the biggest-ever debut for an animated film, powering past $62m previous record-holder Monsters Inc.

And it would have been even more impressive if ticket sales weren't discounted for children and matinees.

But that's not to say the animation lacks grown-up fans  it collected near-unanimous praise from film critics for its sophisticated computer animation and hilarious script.

Finding Nemo is expected to be the catch of the month when it is released in Australia in August.