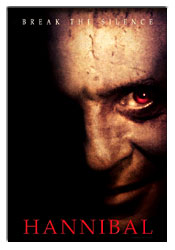 American cinemagoers queued in their thousands for the opening of the long-awaited movie HANNIBAL - but many noticed major mistakes in the movie starring ANTHONY HOPKINS and JULIANNE MOORE.

Movie buffs have noticed, amongst other mistakes, scenes where Moore's earrings change from hoops to studs while the background in a car scene changes from dusk to night and back again in just a few takes.

So-far twenty two gaffs have been counted including:

- At the beginning of the film Clarice takes part in an operation that goes terribly wrong. She takes the blame for it despite trying to cancel the attack using her radio. The FBI records all radio communications as a matter of course and would have excused her when they heard the recording.

- When Hannibal traps Clarice's hair in a fridge door, he breaks off the part of the fridge door handle that actually holds the door shut, not which activates the lock.

- Clarice begins the final scene wearing handcuffs, but when she is forced to hold her hands up by FBI agents, they have disappeared.

There is also an element of irony in the film - on the top of Hannibal's fridge is a vegetarian cook book. (MB/WN&WNWC/PDD)