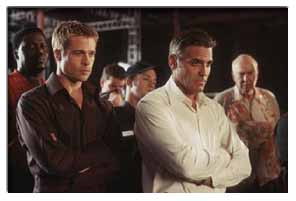 George Clooney has confirmed he is to star in a sequel to hit Hollywood movie Ocean's Eleven.

He will reunite with co-stars Brad Pitt, Matt Damon and Julia Roberts to film Ocean's Twelve.

"Everybody's down to do the movie and we have all set aside schedules for it. I'm really looking forward to doing it," Clooney said.

He refused to reveal any plot details but director Steven Soderbergh hinted that the film, due to start filming in March next year, may be set in Europe.

Soderbergh also directed the first film, in which a gang plotted to rip off three Las Vegas casinos.

Clooney, 41, has been in London to promote two films - sci-fi drama Solaris (2002) and his directing debut Confessions of a Dangerous Mind (2002), a biopic of legendary American TV producer Chuck Barris which premieres in the UK on Monday.