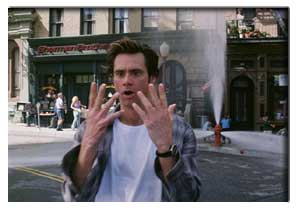 A man from Greater Manchester says he's being plagued by telephone callers asking if he's God.

Andy Green's number is the same as that of the fictional God in Jim Carrey's new film, Bruce Almighty.

The 28-year-old, from Irlam, says he's being called by "every religious nut" in Manchester, reports the Daily Mirror.

In Carrey's film, God leaves his number on the pager of TV reporter Bruce Nolan, played by Carrey.

Mr Green says he has to tell callers he's not Messiah, but a caterer from Irlam.

He says: "At weekends I'm getting up to 70 calls a day. Most people ring off when they hear my voice. They don't expect God to have a Manchester accent."

Mr Green says he's been in contact with film makers, Universal Studios. He added: "The problem is I'm starting to believe I'm God. I might have to go into therapy."

People in the US who have the same number are also being plagued by callers, and a radio station in has even set up its own answerphone service to deal with cranks.

Universal said the number was picked because it doesn't exist in Buffalo, New York, where the film is set.