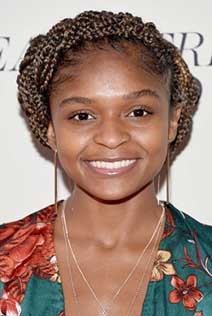 Dominique Thorne, who will star as the superhero Ironheart in her own Disney Plus series, will make her Marvel Cinematic Universe debut in "Black Panther: Wakanda Forever" next year.

Disney's "Ironheart" series was first announced at its Investor Day in December, revealing that Dominique Thorne will play Riri Williams, a young Black woman who takes over the mantle of Iron Man. "She started shooting, I think, this week before her Ironheart series", Marvel Studios President Kevin Feige told ComicBook.com.

In the comics, Williams is a Black teen prodigy attending MIT who builds her own suit by reverse-engineering Tony Stark's Iron Man suit design. Williams is also a genius like Tony, if that's not immediately clear. In the comics, Pepper Potts mentors Riri in a similar fashion to how Tony took Peter Parker under his wing in the MCU, providing her with resources and a suit AI.

"Black Panther: Wakanda Forever" will hit theaters on July 8, 2022, and production began in June 2021. Details on the film are being kept under wraps, but cast members Danai Gurira, Letitia Wright, Daniel Kaluuya, Winston Duke, Lupita Nyong’o, Florence Kasumba and Angela Bassett will likely reprise their roles from the first film.