Wonder Boys To Be Re-Released 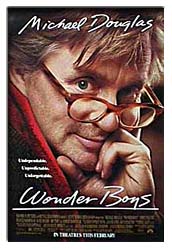 WONDER BOYS, the MICHAEL DOUGLAS film that had a poor box office showing earlier this year (00), is being re-released this week.

The film, which features Douglas as a burnt-out novelist and university professor, grossed only $18.7 million (£12.4 million) during its initial release. The decision to give the film another chance was first suggested by CURTIS HANSON, the film's director. PARAMOUNT PICTURES agreed to his request in June (00).

Paramount hopes this release may recoup some of the film's investment and give increased visibility to Douglas' performance before Oscar ballots go out. (RGS/WNWCAN)