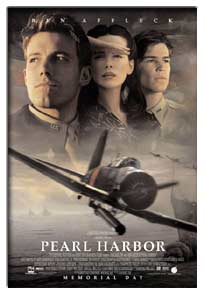 New film PEARL HARBOR (2001) is facing its own bombs - as American critics viciously turn on it.

Though the $140 million (£115 million) DISNEY flick is one of Hollywood's most expansive outings ever, the usually appreciative US press is giving the "schlock" film a battering.

THE ASSOCIATED PRESS describes the popcorn epic as "three hours of dreck," and chides producer JERRY BRUCKHEIMER and director MICHAEL BAY for churning out a "dumb, soulless behemoth that delivers the cinematic equivalent of shell shock".

Invitees to the private screening at the ASTOR PLAZA on Tuesday (22MAy01) night were just as underwhelmed. Many in the audience headed for the exits during the picture's final half-hour.

Others broke into laughter during a pivotal scene in which KATE BECKINSALE tells BEN AFFLECK she had an affair with JOSH HARTNETT after Affleck's character was shot down and believed to be dead.

One dismayed viewer called the flick a "nearly three-hour video collage of every awful clich you can think of" and declared, "it is told without emotion, character or reason. " Another said, "It's really like a giant cereal commercial - with death raining down. " (NFA/WNWCPS)